I had my technicians make me a few metal picks, and I decided as an experiment to put a layer of Diamond-Like Carbon (DLC) on it. When I tested the pick, I realized that this is the best guitar pick I have ever used. I passed out some prototypes to fellow colleagues and other guitarists and everyone agreed it surpasses all expectations. Even non-guitar players were asking me where they could buy one. I realized I have something here.

Applying physics to make the perfect guitar pick was a natural fit for Mearini, Founder and President of GENVAC Aerospace Inc. As an 18 year old, on the eve before driving to Berklee College of Music in Boston to pursue a degree in Guitar Performance, the young college freshman had a change of heart. A change that would eventually lead to a doctorate in Thin Film physics from Case Western Reserve University. While a formal degree in music was not in Mearini’s future, music continued to play an important role in his life. “I always keep a Gibson SG in my office,” Mearini joked “it makes testing the picks easy.”

When asked what advantage the DLC coating actually adds to the steel picks, Mearini explained “The surface of these picks creates the lowest coefficient of friction possible. It means it won’t wear and break your strings. Traditional metal picks without the coating require added caution when playing for fear of breaking a string mid song. The wear that is typically experienced from a metal pick on metal strings will not occur. This pick delivers an aggressive predatory sound, and subtly generates new spectral harmonics. It sounds like you are hitting the strings with a diamond sword.”

“This project allowed me to combine my scientific expertise with my love for serious rock to create an amazing product here in the Rock Capital of the world.” Mearini noted.

“This pick adds one more innovation from Cleveland, since Cleveland invented laboratory diamond, diamond-like carbon, Rock-n-Roll AND the man of steel – Superman!” 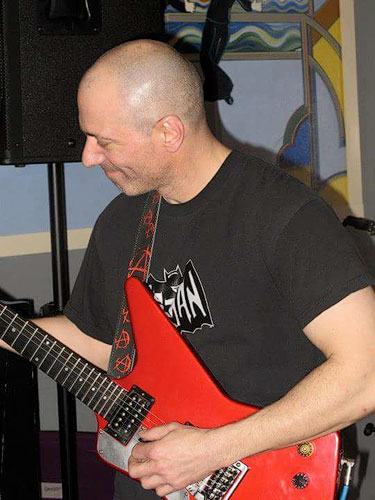