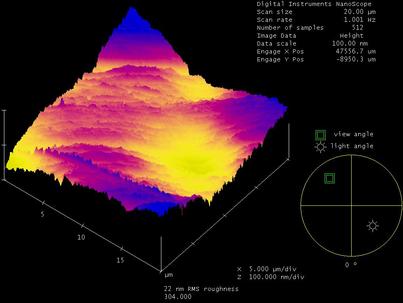 Rock Hard picks are scientifically engineered with a combination of precision metal-finishing and diamond nanotechnology.  Picks are manufactured from high-grade stainless steel, electro-polished and then vacuum coated with a layer of chemical vapor deposited(CVD)  diamond-like carbon (DLC).

The DLC coating on the surface of Rock-Hard picks was originally developed for night-vision optics used in military aircraft, vehicles and portable thermal imaging systems.  The material is a dense, extremely hard form of amorphous carbon which possesses many mechanical and thermal properties of its crystalline sibling, CVD diamond.

Because of the hardness and amorphous nature of DLC, the nano-coating is highly wear resistant and conforms to all of the imperfect structural inconsistencies in a polished metal surface.  So the coating actually makes a polished metal surface even smoother.  The pictures to the right show the effect of the DLC on the roughness of the pick.  The top picture is before coating where the surface roughness is 22 nanometers.  The bottom picture is the same pick after being coated with DLC, where the surface roughness is 11 nanometers.  That’s twice as smooth as the bare polished pick shown in the first picture.

In addition,the coating has virtually NO FRICTION (more slippery than Teflon), so there is no metal-on-metal wear when it’s pressed and dragged continuously against guitar strings.  It’s like having a permanent “dry-lubricant” on the surface of your pick.

The result is an extremely hard surface that doesn’t wear, and will not abrade the metal it’s rubbing against, e.g. guitar strings. AFM* of electro-polished Rock-Hard pick before DLC coating: surface roughness = 22 nanometers.

Hand-Specific Picks were developed to achieve the maximum benefit from the remarkable nano-coating, Diamond-Like Carbon (DLC), which covers the outside surface of every ROCK HARD Pick.  DLC was originally discovered by NASA in the mid-1970s and then finally understood through research at Case Western Reserve University during the 1980s.  DLC is an amorphous (which means it has no crystalline structure) coating which possesses many of properties of crystalline diamond, especially hardness, thermal conduction and optical transparency for infrared light.  It is the critical coating used on the surface of computer hard drives on the outside surface of night vision optics, which are mounted to the outside of America’s most sophisticated aircraft and military land vehicles, and must endure extreme conditions such has huge temperature swings and severe abrasion.  DLC can handle this without issue because it is 10 times more slippery than Teflon.

So what does this have to do with Hand-Specific Picks?  Well, since ROCK HARD Picks are made from a hardened stainless steel, the pick edge will never wear.  That’s a good thing BUT it also means you won’t achieve a “sweet spot” with your pick after “working it in”.  So “Hand-Specific” means that we’ve worked it in for you!  If you look closely at your favorite pick you’ll see the wear pattern on the edge, and if you look REALLY CLOSELY you’ll see it wears only on one side of each face of the pick.  This wear pattern is opposite for right handed and left handed players.